American sculptor James Surls may very well be an artist at an end of an era — his venerable methods for creating sculpture head toward extinction as computer design further infiltrates the visual art world. The documentary The House, The Hand and the Hatchet follows Surls through 2015 as he tirelessly works to create new large-scale bronze, steel and wooden sculptures and travels around the world to install them. The film depicts not only a slice of Surls’s life but also a glimpse into the psychology behind his monumental artwork and the legacy he hopes to leave behind.

“As always, I must ask questions of myself. What do I do with what I feel, sense, or believe? What do I slot my beliefs in…. a truth that has no proof other than what I give it from my own experience? Why am I confident in the reality of something that cannot be touched or seen, yet it is upon me as surely as the air I breathe?”

James Surls is an internationally known artist and one of the most preeminent sculptors in the United States. His artwork has been in over 350 solo, group, museum and gallery exhibits across the world, he has been featured in over 425 national and international publications and has exhibited in over ten countries. Expressionist in style, his wood, steel and bronze sculptures, drawings and prints, reflect his unique sensibility to natural forms but more profoundly, though, they speak about the man himself.

There are those in the world in the highest of learned positions who would ask, “of what truth and of which and of whose truth do you speak? As an artist James would answer all by saying simply, “my truth”. James Surls is an artist, a philosopher and a storyteller. Drawing and sculpture are his language. Modernism is his grammar: While James Surls’ work is a narrative (and highly autobiographical), the methods he uses to express himself visually challenges the techniques of traditional storytelling.

It is this combination of personal narrative mediated by modernist methods that makes Surls a sculptor and draftsman like no other artist working today. 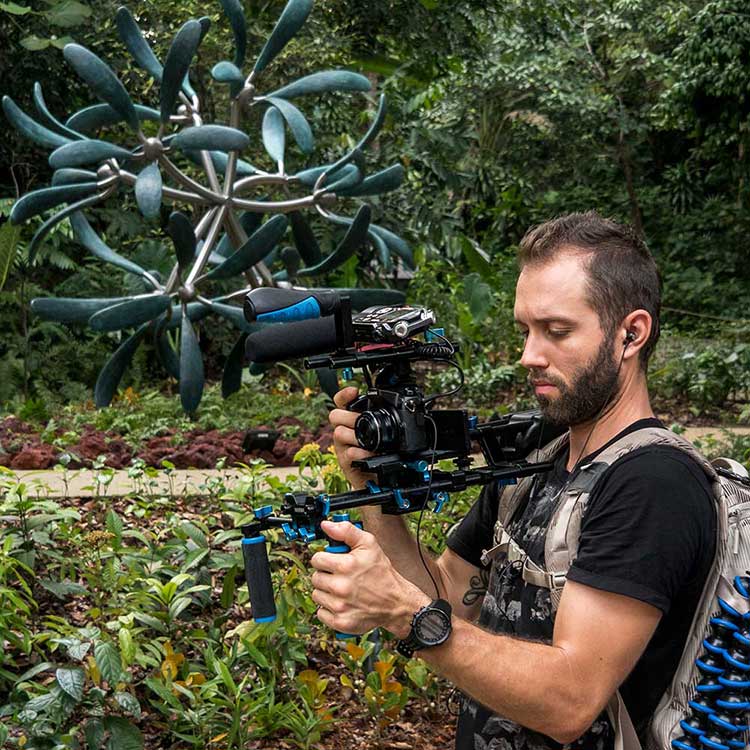 Award winning filmmaker and photographer Austin Lottimer, caught the attention of Olympus cameras by winning the 48 hour “PEN Your Short” at the Vail Film Festival, with his short “Running Colors”. This was the breakthrough he needed, allowing Austin the privilage to be introduced into the “Olympus Visionary Program” which he is still a part of today.

Olympus Trailblazer and award-winning filmmaker and photographer Austin Lottimer got his start making action films using his father’s camera when he was six. At 16 he landed his first professional gig as a sound and camera operator for Good Time Golf, a FOX Sports travel golf adventure television series.

Over the next several years Austin worked on numerous independent film projects, music videos and documentaries in roles from key grip to editor and director of photography. In 2005, he and his brother, Maitland Lottimer, started their own film company, Bujin Productions. Under that company, they won the “48-hour Pen Your Short, at the Vail Film Festival” with their film, Running Colors.
In 2014, Austin transitioned into a new company he co-founded, Trine Films. Today, he continues to direct and DP numerous commercials, events, documentaries, short films and industrials.

Filmmaker Maitland Lottimer started off at an early age, shooting short films and stop motion animations with a home camera. Currently a founding partner of Trine Films, Maitland is directing, writing, and composing music for many short films, commercials, and documentaries.

Award-winning filmmaker Maitland Lottimer fell in love with film at an early age shooting short films and stop motion animations with a home camera. This piqued his interest in filmmaking as a career and propelled him into his first film job as a sound and boom operator for Good Time Golf, a FOX Sports travel golf adventure television series.

Over the next several years, Maitland created independent music videos and short films and, through a collaborative effort with his brother, Austin, formed Bujin Production in 2005. Shortly thereafter, the pair entered “The Vail International Film Festival” and won with their short Running Colors. The recognition grabbed the attention of Olympus Camera Corporation and Maitland was invited to be a member of Olympus’s prestigious “Olympus Visionary Program.”
Today Maitland is directing, writing and composing music for many short films, commercials, and documentaries with his new company, Trine Films. Mr. Lottimer has been involved in the production, sale and distribution of media, film and TV projects for the past 40 years. During this time he has been involved with more than 70 theatrical productions on stages from Europe to Los Angeles and the production and development of film and television projects with Disney, MGM, Columbia, CBS, Warner Bros., Paramount, Orion, Lorimar and FOX.

Mr. Lottimer received a Bachelor of Fine Arts Degree from Virginia Commonwealth University, an associates degree in business at Champlain Business College in Burlington, VT, as well as studied psychology and law at the University of Vermont, and Santa Monica College.

As an independent producer he has raised over $100 million through private or syndicated deals and has a sophisticated knowledge in private and institutional fund raising. Throughout his career, he has lectured frequently at universities in Los Angeles, New York, Richmond, Oklahoma City, San Francisco, Dallas and Boulder on topics that include strategic marketing, promotions, finance, and developing, producing and distribution of projects. He has frequently lectured at the University of Colorado film department.
Mr. Lottimer brings years of management skills with a unique blend of creativity, distribution marketing expertise and business savvy to film organizations. Calling is the quickest way to get ahold of me.